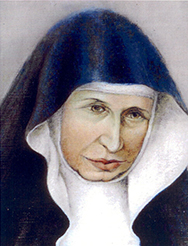 The foundress of our particular Franciscan congregation, Catherine Damen, was born in 1787 in the village of Laak in the southern part of the Netherlands. She lived in a period of great religious and political unrest. An event of great importance occurred in her early life in the city of Maaseik when the Franciscan Capuchins returned from exile and introduced her receptive mind to Franciscan spirituality. By 1817 she made her perpetual profession in the Third Order Secular of St. Francis, taking the name, Magdalen. She often referred to this as the greatest day of her life, since it was then that she made her total surrender to God. Catherine and her companions taught religion, needlework, and visited the sick. This was preparation for later work with the neglected children of Heythuysen, the small Dutch village that became the birthplace of the congregation. Three women attracted by Catherine’s simplicity and dedication joined her in 1827 and became the nucleus of the religious congregation which was founded in 1835.