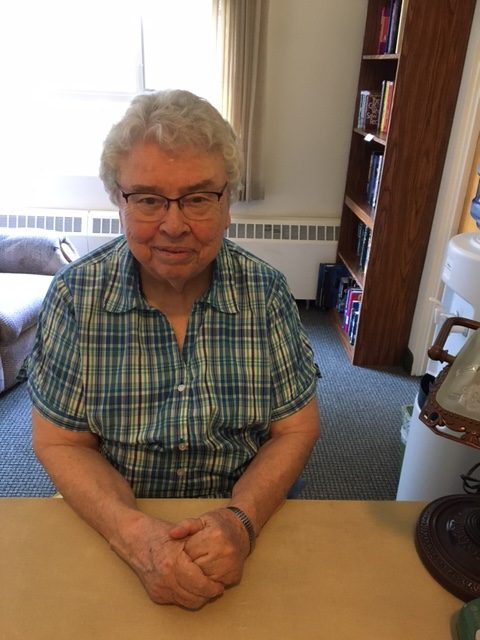 I was born and raised in a loving family in Sacramento, California, and, with my three younger sisters, attended St. Francis Grammar and High Schools, the same schools our parents attended. My great grandparents came to the San Francisco and Sacramento areas in the 1850s and married at old St. Rose parish church in Sacramento. (That church burned to the ground later.} As a child, I heard lots of stories about old Sacramento, including the Gold Rush, Sutter’s Fort, and more. My grandparents helped with the building and financing of both St. Francis Church and the first convent for our sisters. They were among the parish members who met the sisters at the train depot when they arrived from New York in the early nineteen-hundreds. Sister Clement Finkle, who was among the group of sisters that arrived, became good friends with my grandmother as the years went by. They worked together in church doings.

During my first month teaching, there were 72 children in the second grade. Only one child was turned away. The Pastor told the parents there was no more space. The parents called Cardinal McIntyre who was Archbishop of Los Angeles. The Cardinal called the Pastor. The Pastor told us later that he politely told the Cardinal that he could not get one more desk into the classroom. There was no more space! The Cardinal told the Pastor there was space and to remove the teacher’s desk immediately and accept the child into my second-grade classroom! And then there were 73! All this happened at Annunciation School in Arcadia.

I grew up in a Franciscan parish. Franciscan priests and sisters were around us all the time. They were creative in diverse ways. Their creativity was around ministry, and they would frequently enlist help to send boxes of clothing or food to the poor and to publish the school paper by putting on a fundraising drive among the classes to enlist support for subscriptions to Catholic magazines and newspapers for our homes. Father Francis Gliebe visited our home two or three times a year and told us stories of his ministry in Northern California. These sisters and priests and lots of others impacted my call to the Franciscan way of life to serve Christ and His Church. There is a story about a priest whose little nephew asked him one day, “When did you decide to be a priest?” The priest answered, “Every morning when I get up!” This is a good answer for every new day in my life too as a Franciscan sister.

I now live in Santa Maria at Marian Convent. Speaking in the present moment of time, I believe that our living contemporary Franciscan values means a loving response to the well and unwell, for all have suffered and are suffering from the chaos of the pandemic. The pandemic, as life interrupting as it is, has afforded us, in a special way, to be open to “the Sacrament of the Present Moment.”