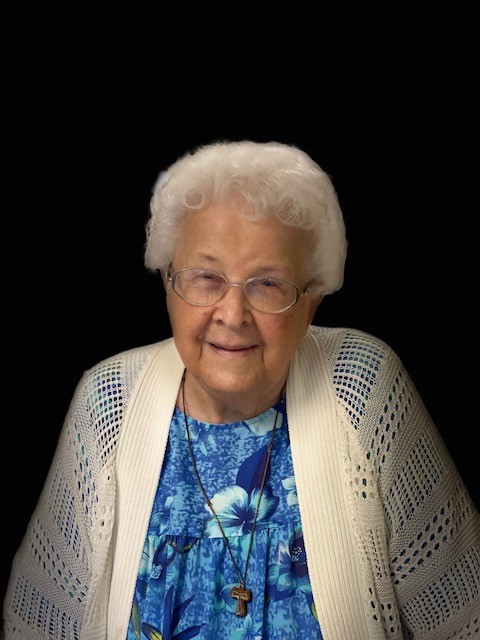 I was the third oldest of nine children. I was never a good student, and I was never part of the “in” crowd and didn’t participate much in local activities. My family lived in Milwaukie, Oregon, just outside of Portland. During the depression, my father and his brother started a small grocery store, which developed into a large store, called Dieringer Bros. He worked in that store for a long time until he was injured in a streetcar crash. At some point, he also worked in a sawmill. Though we didn’t receive allowances, we were never without. My dad would give us each a dime to go to the movies when we wanted to go. My mother made all our clothes and all the clothes for our dolls, which we received from Santa on Christmas. Christmas was very special. As a family, we would go to midnight mass and, when we returned, we always discovered that Santa had been there to put up a decorated tree with presents underneath. My parents said he didn’t have time to wrap them. Years later, when we found the tree still decorated on January 1st, we discovered a note from Santa asking us to help with decorating and taking down the tree each year as he was very busy. At the time of this writing in late 2021, one of my brothers, a retired priest, and 2 of my sisters are still living. I’m the oldest of my living siblings at 96.

When I wrote my letter to the sisters, I stated that I wanted to be a nurse. But when it was time for me to work, the Provincial Minister called me into her office and said that teachers were needed desperately and that I could help by teaching second grade at St. Joseph’s Catholic School in Los Angeles. She said that, if I taught for three years, then I could choose whether to continue teaching or go to nursing school. I agreed though I knew nothing about teaching. After two years in Los Angeles, I was sent to Sacramento to teach first grade students. In Sacramento, I fell in love with teaching and my idea of a nursing career went out the window! I taught first grade for 25 years in Sacramento and many different places. In those years, children had a wide-eyed anticipation. It was easy to get them really excited. Because first grade was their first time out of their homes, I was often seen as a replacement for their mothers. I taught the basics in first grade: numbers, shapes, colors, and early reading and writing. After teaching in classrooms, I tutored children with reading and math disabilities. I was also, for one year, a cook at a very small retreat house in Seattle, which I really enjoyed because I like to cook.

When I was in the 6th grade, I thought I wanted to be a sister, which lasted until I was in 9th grade, when I changed my mind. However, when I was a senior, the desire returned. During my junior and senior summer, I worked at a lumber mill where my father worked. The first summer I was an off bearer on a saw table. The next summer, while I was working, this feeling came over me that I wasn’t supposed to be at the mill; I was supposed to enter the convent instead. At the mill, my dad and I always had our lunch together. One day I told him that I wanted to enter the convent. My father had a way that, whenever he wanted to emphasize something, he shook his finger at me. He did that and said, “Whatever you do, join a community that practices charity like Manuela’s” (his youngest sister). So, after a few weeks, he asked me if I’d told my mother. Soon after that, while I was ironing and my mom was darning socks, I told her. There was no fuss. I chose Manuela’s community to visit, and I wrote a letter. I don’t know why they accepted me as it wasn’t a very erudite letter, but they said I could join them even though my aunts didn’t really know me. This was during the time of the depression, so we didn’t travel much to see each other. Later, my younger sister, Angie Rose, named after our mother, joined the province. Her religious name is Norberta. We switched names!

I was asked to live in the convent as the assistant to the minister in 1991 and I’ve been here in Santa Maria ever since, helping in numerous ways. I was able to care for people as a hospice volunteer, including my sister, Norberta. Now, once a week, I go to medical records and put papers together for the nurses.

I’ve had time to just sit and be comfortable with my God. I’m at peace with knowing what God wants me to do. Ever since I stepped foot in the Sierra Madre convent, I’ve never wanted to leave. I’ve had the normal ups and downs but, even in the down time, I knew that this was the community where I was to live my life for God.