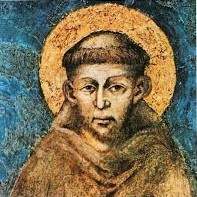 Francis lived in the 12th century, and he might never have been heard of except that his responses were so radical as to be right for all times, including our own. Faced with an imperfect world, he didn’t follow any new movement or idea. He simply lived the gospel following the footprints of Jesus. His joyful dedication drew others to the simplest way of life. He was the world’s premier environmentalist. He had a profound understanding of the goodness and interconnectedness of all of God’s creation and was able to relate to wolf, bird, leper, sultan, royal, and peasant with the same gentle courtesy. He recognized the sun, moon and stars as his brothers and sisters.