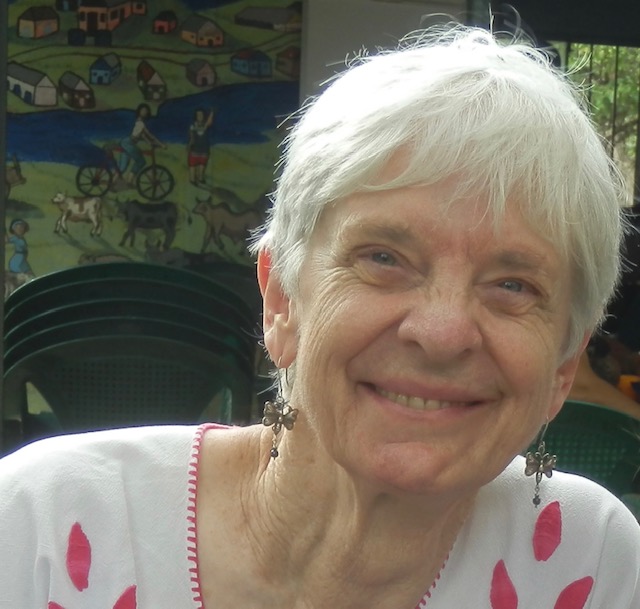 I began my life in Southern California in a small-town bordering East Los Angeles. I had four siblings. When I was five, my father died in an accident and, for the rest of my childhood, we lived with a single mom. A couple of years later, our family moved to Sacramento where I went to St. Francis schools. My sisters Anne Marie, Celie and I joined the music program there, meeting a teacher who became a loving father figure to us. Our family was all very musical. Very often when we were together, there was music involved. We would make up songs while doing the dishes. Mom, Anne Marie, Celie, and I were always in choirs and Celie and I were part of a German choir that met right across the street in Sacramento.

As we grew up, I watched my older siblings leave the house. Tillie went into the convent. Anne Marie left to join the Maryknoll Sisters but returned home and then married. Jerry, named after our father, went to live with our Norwegian uncle and aunt for some years in Western Washington. Jerry returned to live with Celie and me during our high school years before I entered the Franciscans and Jerry went to Air Force Officer’s school, leaving Celie at home with our mom. Our mom died five months after I entered. When she said goodbye to me, only she knew she wouldn’t be around. When she later wrote to me after collapsing at work, I learned that she had cancer. I would say her death at that time was very strong for me. She was my one ally in the world in terms of having a similar point-of-view and seeing everything. Her experience of God was what shaped the mom that I knew. I loved the relationship with her and what we shared together. I was a big one for the underdog and, when I was in 8th or 9th grade, I read a book by Irving Stone about the man who started labor unions. I was very, very moved and wanted to dedicate my life to that kind of service. I told my mom about the book, and it turns out that she knew this guy! He ran for President 5 times, 2 times from prison, and she voted for him all 5 times! During WWI, she was 20 years old and made a point of being friends with Germans.

It was during my second, third, and fourth years of teaching in Montana that I had a lot of freedom to come up with ideas to enhance subjects through art, music, and dance. I remember when one whole class recreated a series of parables though songs they created along with movement. Another time, my students looked through magazines, especially paying attention to advertisements, and found things that expressed parables in themselves. Like artist and sister Corita Kent, we looked at everything as part of the mystery and consider what it expressed and how to break the code. For the ascension, we decided together that we could get the whole school involved to celebrate the ascension through displaying how an earth-bound person became part of everything. They made up a song to Mexican mariachi-style music and created a line dance. At the end of the day, I remember that the whole school was outside, and all the students released balloons up into the air. During art classes, I would put on music and ask the students, “What color is that?” Then the students created an art piece just with that color and its various shades. At the beginning of each year, I positioned this quote at the front of the classroom. “To understand is to stand under, which is to look up to, which is the best way to understand.”

It was hard to leave Montana. I loved it. The next year, when I moved to Pasadena, our parish was made up mostly of African Americans, then Mexican Americans, and a minority of white students. Because the students loved movies and Star Trek was popular, we used that movie to discover how movies are made. I called up the producer, Gene Roddenberry, and let him know that the class was studying Star Trek to learn how to critically watch movies. That resulted in some of the students spending a day on the set, where he described the reason, he started creating Star Trek. He realized that, if he created a reality on another planet, he could cover any issues he wanted, like racism, civil differences, and other social issues. Soon after his visit, the students made a film and invited Gene to come and watch with them. I loved teaching and was lucky in the principals I had.

During WWII, my mom came up with the idea to create a May shrine to honor the Japanese. The FBI interviewed her because her husband was a “foreigner” and might be German and conspiring with a Japanese man who was a gardener. (My dad was Norwegian.) I found alignment with my mom and, when she died, I felt very alone and went into a fog for 5-6 years. While in college, I read a book by Rudolph Otto about awe and the numinous state through which we can experience God and loved the Hungarian professor who taught that course. He had spent time in a prison camp and escaped to the U.S., where he received American citizenship in Buffalo, New York. I was in the midst of registering as a music major at the local state college and, while talking with one of the sisters about the music department, I had an experience of incredible light which guided me towards becoming a Franciscan. Before joining, I went to Norway to meet my father’s family.

I live in Oakland, and I share the things that are exciting to me with friends, with my local community. It all has to do with how everything, everything, everything, is an expression of the divine, of the incarnation. Right now, where I live, I’m really excited about regenerative gardening, permaculture, mycelium forests, all that stuff. I can’t get enough of it. I read A Hidden Wholeness by Parker Palmer, The Books of Delights by Ross Gay, A Paragon by Collum, Jesus and the Buddha by Marcus Borg, The Disinherited by Howard Thurman, The Earth Gospel, Sacred Earth- Sacred Soul by John Phillip Newell, The Overstory, and everything I see by Thomas Merton and Charles Eisenstein, including The Beautiful World that Our Hearts Know is Possible. I can’t get enough poetry and music – a language that can interpret what you know and have no words for – so that we can speak to it. And I watch YouTube for music and Yoyo Ma and the places he goes where he’s never gone to meet the people there and make music with them. In addition, I teach with Capacitar and continue to belong to Pace Bene.

That the world is round and everyone and everything belongs. That God is good and so is everything else. It may get buried deep but goodness is at the essence of life.

One of my favorite quotes is from the Praises of God by St. Francis: “You are good, all good, supreme good. You are enough. You suffice. You are all we need.” This “You,” of course, is the great cosmic personal presence. Another favorite quote is from our founder, Magdalen, who said, “Oh. This isn’t my work. couldn’t even dream it up. It’s God’s work.” And that work includes everything, inner, outer, creation, evolution, everything. My favorite poems right now are “Aimless Love” by Billy Cannes, “When I Am Among the Trees” by Mary Oliver, and anything by Ursula LeGuin and Ross Gay.

I’ve been recovering from various health mishaps for 2 years and experience very often being helpless to do anything, to get dressed, to get into bed. And, yet, towards the end of that time, I knew that some kind of transformation had happened within me, not because I had been doing any spiritual practices, not because I was being good. I was doing nothing. It convinced me that God does everything that is being done.