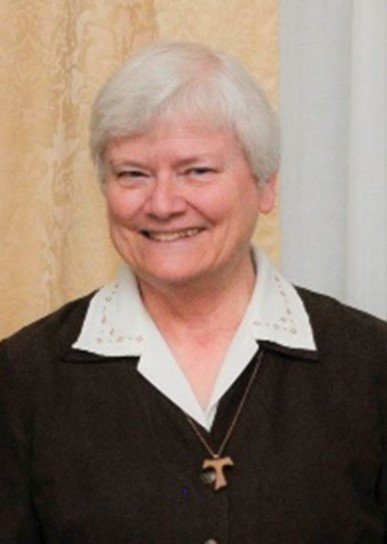 I was born in New York City, NY and lived on Long Island for my first eleven years. I have four younger brothers. I recall attending a new school almost every year; the community was growing rapidly, and the school district boundaries were changing. My classmates and I may have changed schools often, but we changed schools together; so, it was not a traumatic event for us. My father worked in the aerospace industry (Aerojet) at the beginning of the space age; they worked with the developers of missiles and got a job in Sacramento, CA. I lived there until I entered the community, and it is where I first met the Franciscans. I was about 14 years of age, a student at St. Francis H.S. and Sr. Dorothy McCormack was the spiritual director for Third Order Franciscans High School group, the Heralds, of which I was a member.

I was a young H.S. Biology and Science teacher at Alverno High School in Sierra Madre, CA (all girls high school). I loved that job and my first year of teaching was an exciting time in education. We were looking for a new system of learning, a creative approach that would increase student engagement. I was able to give the students options for selecting course materials that they were eager to learn about versus requiring certain topics. Students were more motivated as was I; we went on field trips on most Fridays, small groups of girls piled into our station wagon, and we’d head for the hills. (Literally) Mt. Wilson was in our backyard! Sometimes our destinations included the shores of Malibu or out to the high desert. In those days, there was a gender gap and women were underrepresented in the sciences. This was an opportunity to affect the myth that boys were better at science! Our field trips were a learning experience that plugged into their natural curiosity. The students saw first-hand that science was relevant to their lives, even fun, and in turn they were more interested in what it had to say.

Learning about Franciscan spirituality as a way of life at an early age was appealing; I saw the way the sisters lived, and surmised their kindnesses were directly linked to Franciscan values. I wanted to learn more. I was in high school during the Kennedy era when young people were asking, “what can I do for my country,” we were being taught by strong, educated, religious women, like Sisters Carole Marie Kelly, and Marianne Rasmussen. One afternoon, the Principal, Sr. Geraldine Lauby, stopped me in the corridor, I was certain I was about to reprimanded-but I had no idea why! She asked me what I preferred to be called, my formal name Deborah, or my nickname Debbie? My goodness! She not only knew who I was, she acknowledged me as a person. Looking back, it was a simple question, but it was huge demonstration of respect – for me, a young student. I recognized an act of reverence/kindness was an essential part of Third Order Franciscan values and critical for building a peaceful and just world…being this attentive to people’s needs was how I wanted to live.

As a vowed religious, transition comes to everyone. Finishing my 17-year ministry of leadership in Rome, I returned to Redwood City, and literally settled in almost sequestered due to the pandemic. Attentive to the needs of our community, Redwood City is home to the greatest proportion of homeless residents in San Mateo County. The history of the homeless in Redwood City reflects national trends in the numbers of homeless and the community’s response to the homeless problem. My local community volunteered to make sandwiches for the homeless. Once a month we make sandwiches for 130 people, a hot meal is prepared as well, and on Wednesdays we make meals for 30 people. One summer, Catholic Charities responded to the crisis at our borders; I have the gift of language, I am fluent in Spanish and four other languages. I volunteered for five weeks at the San Diego border to aid asylum seeing families. To my surprise there were many people entering the US who spoke only Portuguese and needed assistance just settling in. In addition to my language skills, I was able to lean on my prior pastoral ministry experiences which prepared me to forge personal connections that build confidence and reduce the anxiety and duress of leaving your home and coming to a strange new land. My maternal great-grandmother and great-grandfather immigrated from Bavaria, Germany in 1890’s and raised their family. Because of two wars, they were forbidden to speak their native language outside of the home and German language became “lost” in the family. I learned a little German in 1978 when I accompanied my grandmother to Munich to visit her last surviving relative. When I was at the General Chapter in 1999, I wanted to converse with the German sisters and studied to be more conversant. Later I was invited by the sisters of Nonnenwerth, Germany to study there. I spent four summer vacations studying German and learning the culture. Through all these experiences, I learned that one never knows what we will be called to do or why we have these experiences. God loves us; we are here to show that reverence to people, and every time we do we increase our humanity and relationships of peace.

It is my hope that people will see us as followers of St. Francis – he set aside so many things to love and follow. Jesus. His love of God was exemplified by his life. It is my wish that we mirror God’s goodness and love in the care we give to creation and to all God’s people.

A prayer which Saint Francis prayed when he was seeking God’s will in his life: “Most High, glorious God, enlighten the darkness of my heart. Give me right faith, certain hope, and perfect charity, wisdom and understanding, Lord, that I may carry out your holy and true command.”

Looking back on my life, my experiences, the opportunities afforded me, and grace in my life, I pray that God will open my eyes and widen my heart to be a loving person who reflects a loving God to all people.