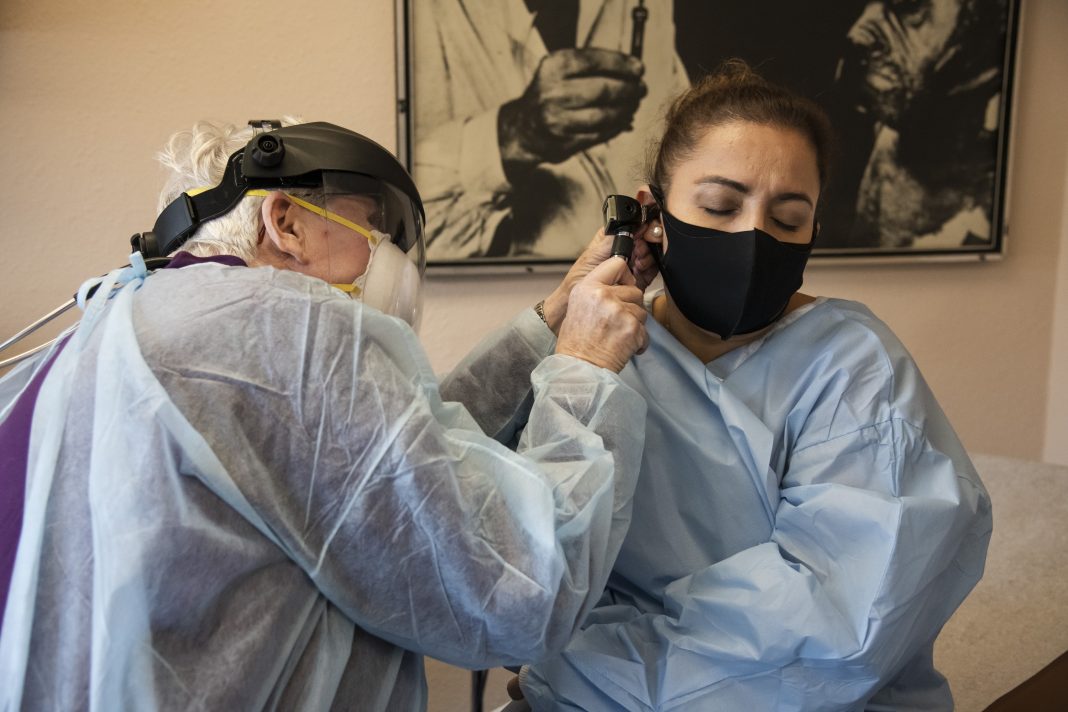 They are migrants. Some have been here for decades. Others have just arrived. Each has a story. They have left behind family and friends to flee corruption, war, poverty, and a myriad of other social ills. All are looking for a better life. So, they come without papers, risking a border crossing that could mean their demise. These are our patients. We are a safety net clinic, Clara’s House.

Clara’s House is a primary health care clinic located in Sacramento, California. Founded in 2010 by Franciscan sister, Kathy Wood, OSF, all of our staff are volunteers. All of our patients are uninsured, live in poverty, and have no other access to primary medical care. We do not charge for medical services, and do provide lab tests and some medicines at no charge to our patients.

Jose (not his real name) came to Sacramento from Mexico decades ago. As a gardener, he built up a successful business mowing lawns, pruning roses and trees, and doing minor landscaping. He had been able to purchase a truck along with a trailer to haul the tools of his trade. But in spite of his success, his eyesight had been slowly deteriorating. He had cataracts, but no insurance, and could no longer see well enough to drive. Jose was referred to us by one of his customers who was very concerned about Jose’s health and about the fact that he could no longer earn a living.

It took several months and a ton of paperwork, often with Sister Camille Martinez, OSF, serving as translator. But, we were able to get cataract surgery for Jose. Sister Kathy Wood, as his primary care provider, referred Jose to a local program called SPIRIT, a program where volunteer doctors perform cataract and hernia surgeries. Jose had cataract surgery in both of his eyes. He can now see again, and is very happy to be back to work.

In 2016, Guadalupe (not her real name) was feeling extremely tired and unwell. Though Guadalupe knew she could not afford the expense, she visited a local hospital emergency room where she was admitted and given five units of blood for anemia. Then she was discharged, and had no further care. Three months later, she went back to the emergency room again and was given another three units of blood, and was discharged — again without the means to have a follow-up with a primary care provider. By the time she found her way to Clara’s House, a year had gone by, and Guadalupe was experiencing extreme ovarian pain with vaginal bleeding.

A few days later, her son called the clinic. Guadalupe was in the hospital and had suffered a heart attack. Sister Kathy and clinic volunteers were able to obtain specialty care for Guadalupe through the Dignity Foundation with the Mercy Medical group. Through the Dignity Foundation program, Guadalupe was able to have hysterectomy surgery, a pacemaker implanted, and ongoing cardiology specialty care. Six years later, her health is a little more stable. Guadalupe still receives regular lab tests, and frequent blood transfusions for anemia. But, as she says frequently, she is grateful for Sister Kathy and her helpers.

As St. Francis and St.Clare of Assisi served the lepers of their time, sisters and  associates of the Sisters of St. Francis of Penance and Christian Charity serve the voiceless and vulnerable of our time at Clara’s House. We are often touched by the presence of Jesus in our patients in whom “we recognize the Christ among us with love and compassion” (1). As our foundress, Mother Magdalen Damen, would say: “We need you. You are most welcome!!”